After seeing my post about designing a pin and banner for the Mid Atlantic Hurricanes, seen here. The Cornwall Dragons from Cornwall, NY contacted me about designing a banner for their 12u team. They are playing in Cooperstown at the end of the summer and were looking to have a banner created to be used in parades and league games as well as for the tournament.

Normally, I would like to take the photos I'll be using in a composite, but do to time and distance the client agreed to photograph the players in their uniforms and send me the images. They did great a great job taking the photos, we only had to re-shoot a few players for continuity. I worked with the team to get some ideas together and nail down what they envisioned.

Below is some of the source images and reference materials used to create the final image.

The final composite was realized through a series of progress images and sketches sent to the client for feedback. I find it much easier to work, with better, faster results, if the process is more of a conversation. Creating images isn't that complicated, creating images that only exist in another person's imagination can be a bit more tricky. Fortunately, Little League baseball teams bring a lot of enthusiasm to a project, the kind of enthusiasm you just don't see often enough on commercial gigs. 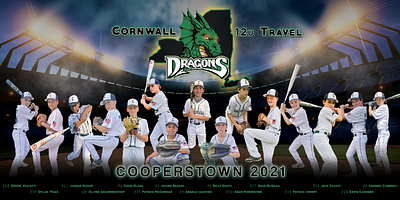